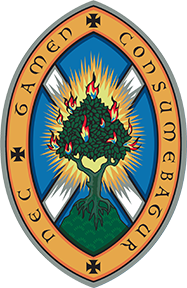 In use since 1691, the Church of Scotland emblem bears the Latin phrase, NEC TAMEN CONSUMEBATUR. Both the Latin text (meaning ‘yet it was not consumed’) and the image of the burning bush refer to the story of Moses’ encounter with the divine in the Book of Exodus.[1] Predating the earliest major secessions within the Church of Scotland, few if any from within the seventeenth-century Kirk would have expected the extent to which fire would test their unity – that ‘aneness’ of which the Scottish Reformers wrote.

Prior to Jesus’ arrest, trial and crucifixion in the Fourth Gospel, he prays for his disciples, saying,

All mine are yours, and yours are mine; and I have been glorified in them. And now I am no longer in the world, but they are in the world, and I am coming to you. Holy Father, protect them in your name that you have given me, so that they may be one, as we are one.[2]

When Jesus prays these words, he is not asking that his followers, the Church, be uniform – that is to say, he is not asking that we be identical and lacking in variation. Instead, as is consistent with the orthodox Christian doctrine concerning the mystery of the Trinity, Jesus is asking that, even in our diversity, we might be united. The very concept of unity necessitates diversity. By expressing this prayer, Jesus demonstrates his anticipation of need for unity, as a desire for strict uniformity poses a great threat to the proper functioning of the Church. What use is a body made up of only one kind of part? Imagine a body made up only of tongues, or one made up only of hands – it doesn’t make for a pleasant sight. The most useful body is one made up of different components, each unique in their function, yet held together and governed by the brain.

As part of this universal Body, throughout history and around the world, the story of Queen’s Park Govanhill is one of the coming together of diverse parts. And each unique branch of our historical church family tree has something essential to contribute to the function of our unified present. In his Epistle to the Church in Ephesus, St Paul writes,

I therefore, the prisoner in the Lord, beg you to lead a life worthy of the calling to which you have been called, with all humility and gentleness, with patience, bearing with one another in love, making every effort to maintain the unity of the Spirit in the bond of peace. There is one body and one Spirit, just as you were called to the one hope of your calling, one Lord, one faith, one baptism, one God and Father of all, who is above all and through all and in all.

But each of us was given grace according to the measure of Christ’s gift… The gifts he gave were that some would be apostles, some prophets, some evangelists, some pastors and teachers, to equip the saints for the work of ministry, for building up the body of Christ, until all of us come to the unity of the faith and of the knowledge of the Son of God, to maturity, to the measure of the full stature of Christ…

speaking the truth in love, we must grow up in every way into him who is the head, into Christ, from whom the whole body, joined and knitted together by every ligament with which it is equipped, as each part is working properly, promotes the body’s growth in building itself up in love.[3]

In the face of many challenges, setbacks, disappointments and losses we have encountered over these last 150 years, we, like that burning bush and by God’s grace, have remained unconsumed. As we have seen throughout our history, every generation faces new opportunities to grow. Insomuch as we are willing and able to listen to and be transformed by the Holy Spirit, who guides us through this movement of God’s expanding Kingdom, we shall remain unconsumed.

Introduction
1. Our Early History
2. The Late 19th Century: a Period of Rapid Growth
3. Into the 20th Century
4. The Great War & its Aftermath
5. A Second World War
6. The Post-War Era
7. The Late 20th Century
8. The Millennium
9. Queen’s Park Govanhill
Conclusion: Beyond 150 at 170
Bibliography